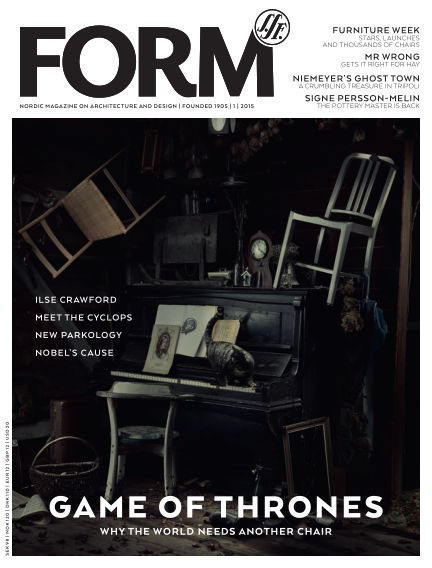 In this issue of FORM Magazine : Form 110 years!
Premiere of the jubilee year at the furniture fair

This year it's been 110 years since the Scandinavian architecture and design magazine Form was founded. The first issue of the jubilee year is released during Stockholm Design Week. Some of the most interesting designers reveal their news for the fair and explain the cult of the chair, the most iconic piece of all furniture .

The same issue features both Marx and Nobel. Victor Marx is the architect who designed the Mies van der Rohe-nominated arts center Cyclopen in Högdalen. Designer Andreas Nobel has written a dissertation on the text's domination at art schools. Form also makes a tour in tomorrow's city park and visits the ghost town of Niemeyer in Lebanon, the Brazilian starchitect's biggest project after Brasilia.

With Readly you can read FORM Magazine (issue 2015-02-03) and thousands of other magazines on your tablet and smartphone. Get access to all with just one subscription. New releases and back issues – all included.
Try Readly For Free!
FORM Magazine