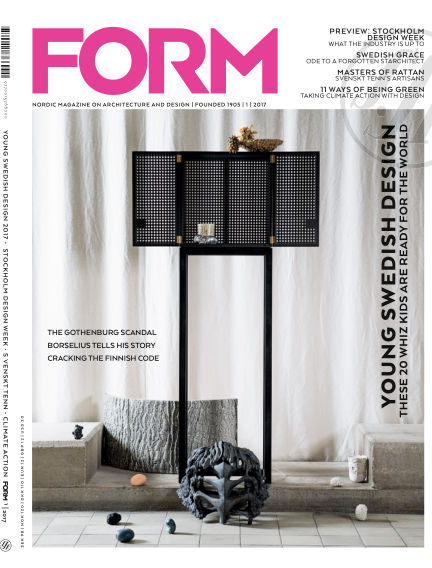 In this issue of FORM Magazine : The new issue of Form Magazine - The Gothenburg scandal and 20 whiz kids who are ready for the world.

Form digs deeper in one of the Swedish design scene’s ongoing scandals: the Röhsska Museum in Gothenburg, which is about to close down. We also present the designers of the future - the 20 selected talents from this year’s edition of the design award Young Swedish Design.

What does tomorrow's design look like? In the new issue of Form a young generation is portrayed, showing a growing interest in sustainability and human interaction, rather than mass production. It involves material research, cross-border crafts and gadgets that make you think again.

Furthermore: Eleven design projects that can save the climate, a visit at one of Sweden’s last basket makers and an investigative report from the scandal at the Röhsska Museum. Salka Hallström Bornold finds the explanation to the Finnish design mystery and Bo Madestrand makes a posthumous interview with Sture Frölén - a prominent welfare state architect. During his lifetime he designed over 500 buildings, including most of the 50’s and 60’s buildings in Solna, but is now almost forgotten.

With Readly you can read FORM Magazine (issue 2017-02-07) and thousands of other magazines on your tablet and smartphone. Get access to all with just one subscription. New releases and back issues – all included.
Try Readly For Free!
FORM Magazine