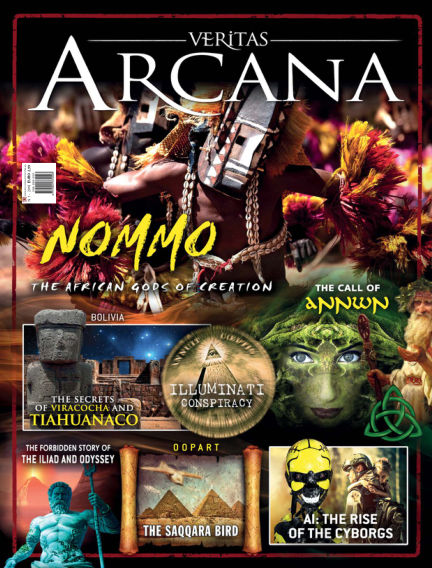 In this issue of Veritas Arcana - EN : In this new english issue of our swedish digital magazine we will discuss Tiahuanaco’s secrets, an ancient city in Bolivia. We don’t know when the city was built and why. What we do know is that the ruins are connected with the creation god Viracocha and the stars. Why did “they” built the Gate of the Sun and the Akapana pyramid? Homer’s secret, an extraordinary study reveals the Nordic origins of the Iliad and the Odyssey. We will investigate the devasting eruption of Thera’s volcano and climate changes in ancient times. Mali: The Dogons and the Nommo, the african gods of creation that comes from the stars and the connection with the Sirius A and B stars. How is possible that the Dogons knows the exact position of the Sirius B star, if that position was discovered only in 1862 by Alvan Clark, with a very powerfull telescope? It was only in 1970s that is was possible to take a picture of the star. The mistery is still unsolved. The rise of the cyborgs Era! The world of Artificial Intelligence is growing and both computers and robots are getting smarter and smarter every day. What would happen on Earth if these super computers evolve and decide to exterminate human kind? OOPARTS: The mistery of the “Saqqara bird”, for many archaeologists is just a toy for children but for other researchers it is the real proof that the ancient egyptians knew how to fly. The “bird”, known also as “glider of Saqqara” has real aerodynamic properties and could fly. Is this pure fantasy? The Nekoma base and the Illuminati pyramid, the history of a secret american base built in North Dakota during the Cold War. The base is in the middle of nowhere and has a pyramid shape with on top the “all seeing eye!”, the symbol of the Illuminati secret society. Just a coincidence? Or... We hope to have stimulated your appetite for research. The adventure begins, enjoy the reading!

With Readly you can read Veritas Arcana - EN (issue 2018-04-24) and thousands of other magazines on your tablet and smartphone. Get access to all with just one subscription. New releases and back issues – all included.
Try Readly For Free!
Veritas Arcana - EN