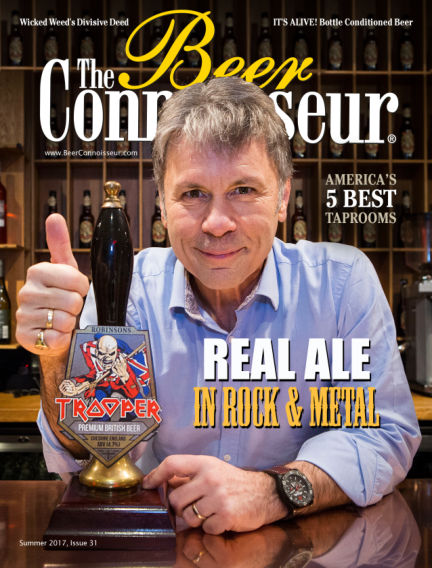 In this issue of Beer Connoisseur : In these wild times, we here at The Beer Connoisseur do our best to remain as informed and consistent as possible. Amidst thousands of breweries and tens of thousands of beers, that's not always an easy task. The reward is getting to share everything we learn with you, our readers.

By looking to us as a source of information and hopefully, insight, you allow us to perform a very fulfilling role, and we hope that our magazine and site can contribute to whatever sort of fulfillment and happiness you seek. Consider us your BEER vitamin.

On the note of seeking out what makes you happy, our cover story this issue, Real Ale In Rock & Metal, takes a look at the parallels between two very common dream jobs: musician and brewer, with the help of some of rock and metal's biggest names. Having chased down one dream, they're now blazing their own trails in the world of beer.

Beer, as we have often stated, is meant to act as a bit of spice on the pastry of your life. Too much cinnamon and you'll be sputtering, but when it's just right, the world is sublime. As you peruse this issue, which features multiple takes on the post-Wicked Weed world, a painstakingly thought out and wholly subjective list of America's Top Five Taprooms and a lot more content we're proud to share, we hope you also consider what passions you might not have explored.

So, enjoy Summer 2017, Issue 31 of The Beer Connoisseur, and when you chase down your dreams, share a beer with them!

With Readly you can read Beer Connoisseur (issue 2017-07-24) and thousands of other magazines on your tablet and smartphone. Get access to all with just one subscription. New releases and back issues – all included.
Try Readly For Free!
Beer Connoisseur