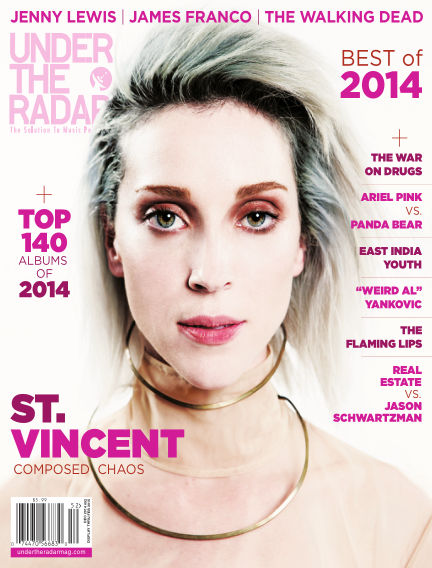 In this issue of Under the Radar : The Best of 2014 Issue features St. Vincent on the cover and interviews with some of the artists behind 2014's best albums.

Some of the highlights of the issue include our Top 140 Albums of 2014 list and the 2014 Artist Survey section, which features Q&As with The Flaming Lips, of Montreal, alt-J, Sharon Van Etten, and many others. Jason Schwartzman and Real Estate's Martin Courtney interview each other and there's also a joint interview between Ariel Pink and Panda Bear. There's an in-depth article on The Walking Dead that includes interviews with actors Andrew Lincoln and Melissa McBride, creator Robert Kirkman, executive producer Gale Anne Hurd, and several other cast members. Other interviews include Jenny Lewis, James Franco, The War on Drugs, "Weird Al" Yankovic, and East India Youth.

With Readly you can read Under the Radar (issue #52 - Jan/Feb 2015) and thousands of other magazines on your tablet and smartphone. Get access to all with just one subscription. New releases and back issues – all included.
Try Readly For Free!
Under the Radar