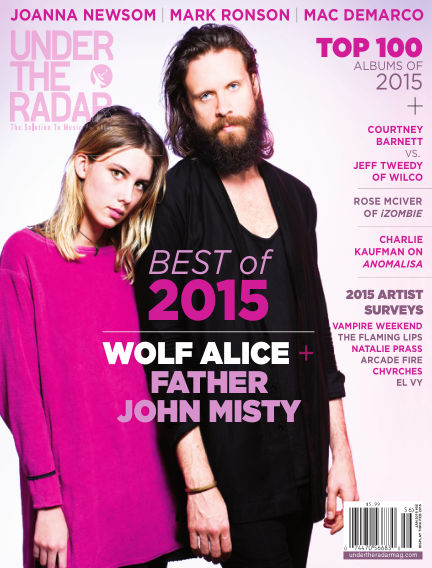 In this issue of Under the Radar : The issue features Father John Misty (aka Josh Tillman) and Wolf Alice singer/guitarist Ellie Rowsell on the cover together.

The issue also features an exclusive joint interview between Wilco frontman Jeff Tweedy and acclaimed Australian singer/songwriter/guitarist Courtney Barnett. Also included are Under the Radar's Top 100 Albums of 2015 list and our 13th annual Artist Survey section, in which various notable musicians reflect on the music and events of the last year. The issue also includes separate new interviews with artists behind some of 2015's best albums, including: Mac DeMarco, Joanna Newsom, Mark Ronson, and Shamir. We also talk to actress Rose McIver about her acclaimed role in the TV series iZombie and Charlie Kaufman and Duke Johnson about their Oscar-nominated animated film Anomalisa.

For our regular last page feature, The End, we ask a different artist the same set of questions about endings and death. Guy Garvey of Elbow is this issue's participant.

And finally, over 75 CDs, films, TV shows, books, and comic books are reviewed in the issue.

With Readly you can read Under the Radar (issue #56 - January 2016) and thousands of other magazines on your tablet and smartphone. Get access to all with just one subscription. New releases and back issues – all included.
Try Readly For Free!
Under the Radar